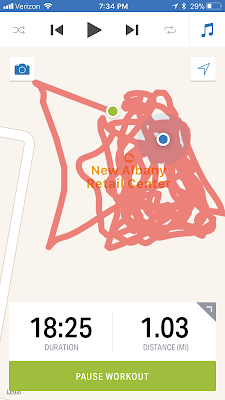 After the last couple of runs that I did after dinner, I decided that I wanted to run before dinner and as late as possible.

I theorized this would work.

However when I arrived at the gym around 7pm, it was PACKED!  The track which is 1/9th of a mile was full of people walking, jogging and sprinting!  On one of the straight legs of the track I had to run on the outside lane for the entire leg just to pass everyone.

When I arrive at the gym later at night I can run the inside lane the entire time I'm there, which could account for why I have to run 9 1/2 laps to get a full mile in! 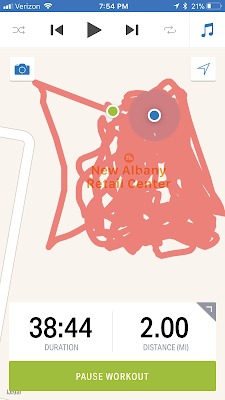 Tonight I was beat.  Honestly, I only ran the first 1/2 mile and then walked briskly the second half.  Maybe it was because I hadn't had dinner yet.  So I kept walking until I hit 3 more half miles!  Yay me!

I had planned on staying until my son called for me to pick him up from wrestling.  When I finished my 4th half mile and my phone notified me of my pace, I texted him to see if he was ready.  Nope, he suggested I go home and shower first and wait for him to text me.  I went home, but I ate dinner.  I was starving!  I appreciate that my husband had made pasta for dinner so I could go running and take care of picking up our son.

I may have to rethink WHEN I run so I have the most energy to actually run!

Popular posts from this blog 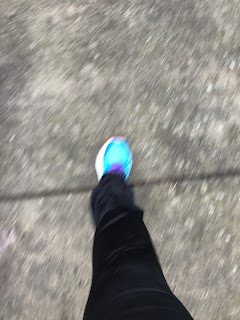 I feel so accomplished that I completed my half mile today before client meetings . The thing I appreciate most is that I’m not taking this seriously. I don’t have a goal to lose weight or to do something that I’ve never done before. All I want to do is go hang out with my daughter  in Cincinnati while she runs the flying pig marathon. I thought it would be fun to walk run crawl trot the half marathon at the same time. And I thought I would do my personal work of self appreciation to help me through this half marathon 1/2 miler at a time.  Today was my third half miler that I have documented .
Read more 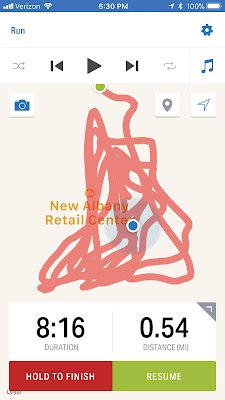 Sunday came and went.  A drove back to her dorm room 200 miles away after we had Chipotle for dinner.  I had a soft taco and chips.  My body was not happy with all the salt, but I managed to sneak a 1/2 mile run in before the gym closed.  It was 28 degrees outside and I was grateful to live so close to a gym with an indoor track.  The best part of this run was still having time to go into the sauna for 5 minutes after running.  It felt so good on my muscles.
Read more